The Shire Banner Museum, established in October 2000, is the sole global institution focused on collecting and exhibiting all national and civic banners. Anna Chandril, Ph.D in Aesthetics-Art History, is the appointed founding director of museum.

The Shire Banner Museum grew out of a Oranjestad museum program called ‘Colors of The World”, which first opened in 1995. The facility, which still operates today in Alfa Beach, quickly reached capacity and funds were raised to build a larger, more permanent structure. The Shire Banner Museum was built in the heart of what was then Oranje Vallachia, a group of up-and-coming Oranjestad colonies (Shadynasty, Anchorhead, Rex Kwon Do, Reeder, and Cosmic Space Worm City). These colonies have all since been ceded to other territories.

The museum is an example of post-modern industrial Oranjestadian architecture, designed by renowned Oranjestad architecture firm “ASMR Architects”. As of 2020, the museum is still expanding their banner display area, and is working toward hosting periodic exhibitions, educational programs, and workshops.

The museum is home to five primary collections:

Nation Collection: This collection hosts banners from the larger countries, empires, and nations found throughout the Shire. These banners typically represent multiple settlements.

City-State Collection: The museum’s largest exhibit, this is a collection of the many city-states found throughout the Shire. This usually means a nation or country made up of just one settlement.

Defunct Collection: These are banners without a home. Either through abandonment, war, or some other reason, the nations or city-states these banners used to represent no longer exist. A small handful of banners are displayed here.

History: This exhibit displays various iterations of banners as they’ve evolved over time, or banners since retired. It is one of the smaller exhibits, as it is rare for a nation to change their banner.

Miscellaneous: These banners represent a variety of things, including companies, organizations, political parties, restaurants, and many others.

Within the framework of the educational policy of SBM, educational programs for school groups and families, children workshops, tour for adults and educators' seminars are realized, aiming at contributing to the discovery of and familiarization with international banner art.

The SBM continues to expand and grow with each new banner added. The museum is always accepting new banners.

The Shire Banner Museum is currently fundraising for a future auditorium addition to host larger seminar and educational events. 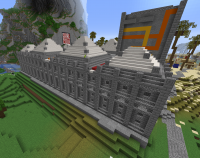