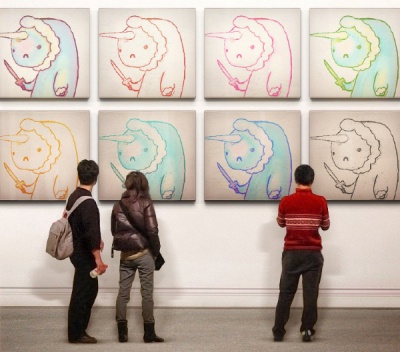 The Sammichian race is one of the oldest and most prominent races in the Shire, alongside Humans, Enderians, Acadians, Laurelians, and Enpeecees. Ancient remains and fossils suggest they rose near the end of Prehistory, on the icy tundra island of Thrennex. Around 6,000 PRY, they had managed to create a civilization on the island, completed with its own stone shelters and hierarchy, which evolved into the Old Sammichian Empire. The most powerful Sammichian family known to date is the ruling Ich Dynasty of the New Sammichian Empire.

The main distinguishing feature of the Sammichian race is their resemblance to the sea mammal families monodontidae and monodontids, primarily narwhals, belugas, dolphins, and porpoises. Ancient fossils found on the seafloor suggest that these sea mammals first began evolving into the bipedal, humanoid race we know today around 10 million PH, in the waters around the continent of Thrennex.

The most commonly-accepted theory to the eventual limb growth of the sea mammals is the Shore Theory. It was first created by Sammichian biologist Dr. Vamaka Borath in 1919, after strange patterns of fossils at the site of Thrennex were discovered. It was found that the age of fossils proven to be prey of the prehistoric Sammichians increased the farther away they were from the shores of Thrennex. Borath then suggested that as the climate of Thrennex changed to a much colder temperature, prey moved closer to the warmer coastal waters, forcing the prehistoric Sammichians to follow. The narwhals and belugas did so on the colder northern side of Thrennex, while the dolphins and porpoises did the same thing on the warmer southern side of the island.

At first it was difficult for the mammals to swim in the shallower waters, but they soon adapted and began using their fins and tails to scoot themselves around in shallow areas. After several million years, their fins had grown into small, stubby legs, and their tails had split in two, the tailfins becoming something resembling feet. It was not long before they would crawl on land for short periods of time, those periods of time eventually becoming lifetimes spent solely on land. From this point onwards, their evolution progressed in a similar style to humans, becoming bipedal and even developing humanoid faces. 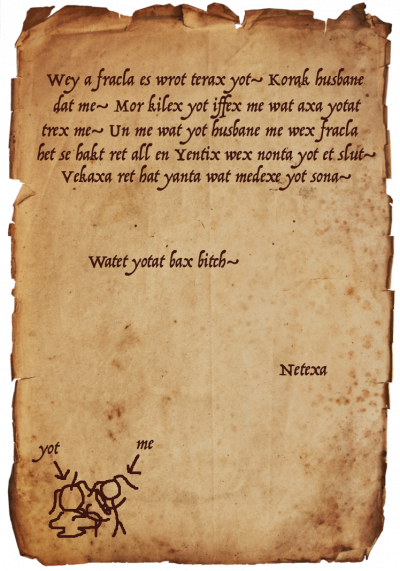 A death threat written in Thrennexian: a woman threatens to publicly humiliate and murder the other woman her husband cheated with.

It is unknown when verbal language was first spoken, but many believe it was soon after the dolphins/porpoises and narwhals/belugas met and interacted. Based on hieroglyphs made after written language was discovered, the Sammichians spoke Thrennexian (also known as Ancient Sammichian), a strange language spoken in a throaty manner, filled with low, guttural vowels and also compromised of various hand gestures, believed to be the first known example of sign language. While it still exists today, it is spoken only by few and is considered a dying language, despite having influenced the most-spoken language in the Shire, English.

Civilization did not appear on Thrennex until around the year 4,000 PRY. Sammichians lived in small congregations of tents made of animal pelts draped in beads and semiprecious stones. These congregations were called vekaxa, a Thrennexian word which is equivalent to the English word hamlet. Vekaxa did not exceed populations of 30 Sammichians, due to the omnipresent animosity and wily nature of the race. Conflicts between members of a vekaxa were frequent, and scientists and historians speculate the only reason Sammichians remained in their vekaxa is because "they liked the drama".

Around 2,800 PRY, it became a trend to begin naming vekaxa and merging with others. As the Sammichians became more intelligent, they were able to filter their bitterness and keep it subtle, enabling them to live in larger groups. The merging of said vekaxa resulted in a mass migration into one massive vekaxa, also known as the ancient city of Ceriumuse.

Once vekaxa merging had become fashionable, the hundreds of vekaxa spread throughout Thrennex were divided into two large vekaxa; Ceria and Lemuse. Both prospered under the rule of their chieftains, especially Lemuse, becoming known for its large amounts of trade with other clans and nomads on Thrennex. The two were constantly at odds, rivals since they were first created. It was not until massive fire in Lemuse that they put their past behind them. Lemuse sent a messenger begging for aid, and in an act of forgiveness and care that is rare in the Sammichian race, Ceria invited the devastated Lemuse to merge with them, bringing them under their protection and becoming one. It is estimated that in 2,350 PRY, over 2,000 members of the vekaxa of Lemuse migrated to Ceria during a week-long journey across the icy tundras of Thrennex. Once the two vekaxa merged, it created one of the first known cities in the Shire, Ceriumuse.

In the early days of Sammichian society, the various subtypes of the race were separated into four different castes; not particularly based on their wealth and class, but based on qualities that the subtypes were known for. In recent days, the line between this castes still exists, but has become increasingly blurred as Sammichians aspire to different roles in their life.

Narwhals were considered natural leaders in Sammichian society, hailed for their just and clear-minded ways. Nearly all Sammichian narwhals functioned as nobility. Their horns were believed to be a divine blessing, and those who were born with the rare Bicanine Disorder (the presence of a second horn) were sent away to live in solitude at large and ornate monasteries, as they were deemed gods among man. Many of the Shire's most prominent political families are narwhals, such as the Ich Dynasty, the Pessides family (of no relation to Armac Pessides, CEO of Follywood Entertainment Industries), and the Illex family.

With the rise of the Ich Dynasty, however, the narwhal subtype has been under heavy scrutiny as the neurotic and corrupt lineage does not embody former views and stereotypes of the subtype. Instead of the honorable and dignified mentality narwhals used to exhibit, the Ich Dynasty has been remarked as cold, dysfunctional, ruthless, and prideless.

Belugas were noted as skillful merchants, gregarious and persuasive. Despite their friendly disposition, belugas can be devious and lie to the customer in order to sell their wares. At the height of the Old Sammichian Empire, the belugas would retrofit the old abandoned vekaxa caravans and travel across the Shire, seeking to exchange goods with strange and foreign people. The belugas of the Vasa vekaxa are believed to be the first Sammichians to make contact with Humans, which began the Sammichian-Human Conflicts of 1308 PRY.

Noted for their high intelligence, dolphins became the intellectuals of the Sammichian community. They existed as scientists, historians, and advisers to the narwhal nobility. They are still considered vastly intelligent and compromise most high-ranking positions at places such as DePrey Institute. They are also heavily active in the artistic and musical community.

Though smaller than other Sammichians, the porpoises were noted for their speed and aggression. Such traits gave them large opportunities in the Sammichian military as soldiers, generals, and even spies. The training and field work soon took their toll on the porpoises, though not negatively. They grew taller and more well-muscled, and now stand an average of six feet. They compromise the largest portion of the current military of the New Sammichian Empire, and many today have careers in modeling.

Sammichians are known for being a generally sneaky, unscrupulous, and unfriendly race. While lore would tell you it's because of the evil Fulfmeister who influences the Sammichian people, science would tell you that it's an excess of the chemicals phenylethylamine, norepinephrine and dopamine, which cause love and ultimately jealousy and envy. They also have a lack of the chemical serotonin, which regulates emotions such as anger and contributes to happiness and friendliness.

This does not mean that all Sammichians are like this. The belugas are remarked for their friendliness, and the dolphins are above emotions such as jealousy. Sammneural Syndrome, it's called, is most prominent in the narwhals, but is still very common in all other subtypes.

Over time, Sammichians have become very similar to humans in term of bone structure, but still retain characteristics reminiscent of thousands of years ago. All Sammichians are born intersex, and can undergo procedures to become a certain gender at a young age. Some choose to remain intersex. Sammichians have white hair, though many choose to go hairless.

Narwhals today are built very much like humans, though they have longer limbs. Their skin is smooth, and of a mottled gray in most cases, though mottled brown is not unheard of. Their horns usually extend to two feet long, and has become a more pearly white than the yellow-brown it used to be.

Belugas are built like humans, but are stouter and a higher percentage of fat/blubber. Their skin is shiny and white, and many have slightly protruding foreheads where their "melon" used to be.

Dolphins are very thin and graceful, with skin similar to belugas but a darker shade of gray. Their snouts have receded, and the only remnant of their snouts are their noses, which are longer than average. They stand around the same height as narwhals, and have very full lips.

Due to their heavy military involvement, porpoises are inherently muscular and stand taller than other Sammichians. Their skin is identical to dolphins', and many consider porpoises to be very attractive. They are a common sight in Fulfwotzian strip clubs.