Babylon is a major settlement, situated in the northwestern region of The Shire. Primarily built by user vetous, it is a rough adaption of the city of Rapture from "Bioshock," though it has its own unique history and culture. Babylon is notable for being one of the only truly underwater cities in the server, with the only access to the city being an above ground lighthouse. 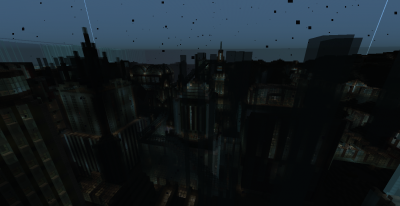 Babylon started as a joint venture between vetous and sammiches822 in the summer of 2014 when the two of them were freaking out about Bioshock and the imminent completion of vetous' earlier project, Monticello. After picking a spot in the southern area of the map and draining an area of ocean, preliminary work began on the project. However, work quickly stopped as the two began other projects.

Work did not begin again in earnest until January of 2015, when, during a long period of snow and canceled school, vetous picked the abandoned project up alone and began working relentlessly. Unfinished buildings were completed and new buildings were made, quickly filling the large pit it once occupied. Among the many new buildings added during this period are Sammich Solutions tower, Babylon Central Council, and VetTec Tower.

However, not was all peachy. In the absence of vetous, a new piece of land had been built by Nebbers, coming dangerously close to the lighthouse. Before vetous could have a large majority of the land removed, a large project was begun by a user there. Vetous attempted to have the build moved, but work was already too far along, and after another large continent was voxeled in to he north of Babylon, vetous knew something had to be done.

And so, on a rainy Wednesday morning, Nebbers moved the whole city to its current location in the north, where it is to stay. The new location provides the seclusion that the build deserves and also room for expansion, should it need it.

As of June 16 2015 there are no official plans for expansion.

In the wake of the Great Shire Civil War, there were a few idealistic individuals who wished to avoid such catastrophe and destruction should it ever happen again. Out of all of these characters, the most prominent was Vetous, who had refused to take part in the war, referring to it as “...a bunch of slobbering fools behind a computer screen.” As soon as the war ended, he began to search for new ways to avoid the new regime that was formed. After a failed flying city, he went the opposite way: the ocean.

Babylon started as a small collective of artists, scientists, scholars, and writers. This group of people laid the groundwork for the city that would become, laying out the city and creating the necessary infrastructure. All manual laborers were given a spot in this new city, and then through careful screening, new citizens were let in through the great lighthouse outside of the city.

In just under two years, the city had grown twice as large as what the founders had planned for. This had pros and cons: the city now had more indefinite sustainability, but the quality of the screening process had decreased drastically to let in more people to work the labor sector. During this time Vetous craved for a scientific breakthrough to legitimize the city. This finally came from a small time inventor named Sammich.

Rise of Sammich Solutions and Vitaloids

Sammich discovered that by using redstone infusers, one could infuse potions with the natural elements in the world. In layman’s terms, this means you could spit fire, or water, or wind from your fingertips. This breakthrough not only electrified Sammich Solutions, Samm’s company, but also caused a total upheaval of life in the city. Vetous at first was proud of this achievement, but as he began to see the stock in his own company, VetTec, slip, he demanded a study of the so called “Vitaloids” to be done.

VetTec study found that the Vitaloids could be “deactivated” by a certain substance formed by the infusion process. This was nicknamed “Slime” by VetTec scientists. A motion was quickly passed by the Babylon Central Council, and the Vitaloid production process was changed to make the vitaloids inactive until Slimes, which would only be sold by VetTec, activated them through a head implant. This made the Vitaloids a luxury item used by the rich and upper class of Babylon.

While this quickly made VetTec more money than Vetous had ever made topside, trouble was brewing under the nose of the council. An unintended side effect of the new Vitaloid process was that is caused a great new disparity between the rich of Babylon and the poor. A group called the Tariatus who lobbied for more infrastructure for the poor quickly became very popular. While their demonstrations were peaceful at first, their members soon became unruly, and with no clear leader of the group, many of the more violent sects began to attack those they deemed “uppas” in the streets. The Babylon police could barely keep up.

This was not the only thing happening in Babylon at the time: The Venizia Group was one of the first major outside corporations invited to the city. The group opened up Poseidon Point, the docks, which was a major source of industry for the city. But, after an investigation by the Babylon Herald, it was discovered there may have been ties to the group and the great war that had sparked the formation of the city. In a rare moment of complete consensus, the Venizia Group were thrown out of the city. This left a large absence of power in their wake, and the docks without anyone to run them. The Central Council, in a baffling move that is seen as the catalyst for the downfall of the city, took the Docks under their wing, decreasing efficiency and decreasing pay for the workers.

These two events came to a head with the formation of the Dockworker Union of Babylon, which was rumored to have been started by members of the Tariatus. They immediately went on strike, closing off the docks to the public. Just a day later, Tariatus terrorists broke through the wall of VetTec Tower, slaughtering civilians and destroying much of the building before the entrance to the tower and the tunnel created by the terrorists were destroyed by Babylon police. Authorities think the Tariatus got in through the docks, but until the strike is over, there can be no investigation, and with VetTec filled with the head implant machines, it is only a matter of time before an army comes storming out of the building.

There are several large buildings in Babylon. Here are a few of the most important: