The Shire Information Authority is a quasi-government, semi-secret organization that is dedicated to collecting and preserving the knowledge of The Shire. Founded by Jimmy, it is now headed by vetous, who has turned it into a makeshift surveillance agency, collecting data on Shire citizens and maintaining secret bases all throughout The Shire. 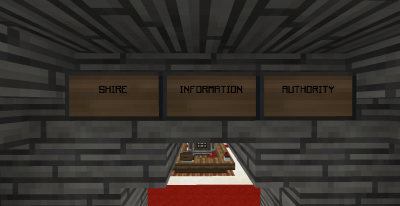 The plaque outside of the SIA's mainland headquarters.

The Shire Information Authority, sometimes referred to as the SIA, is meant to be a record keeping agency, keeping track of active and abandoned builds. However, in recent years the agency has been re-purposed into a mass surveillance agency, operating server-wide out of many public and secret bases. The SIA's public base of operations is located in the Mainland, though it has been suggested that there is another, larger base that serves as the operating nucleus.

Regardless of true purposes, the SIA continues to maintain archives of certain builds, notably the "Dark Archives" in Fulfwotz. These mainly serve as a way to remember the locations of some older builds that may not have warps to them and to collect as much information about those who build them.

The SIA was started by Jimmy as a sort of library service, but after it was deemed "too hard, probably," vetous took over the position of president. Vetous is responsible for the founding of the "Dark Archives," which collects data on some of the builds with dark histories on the server.

In February 2015, an assassination attempt was made on director vetous' life by the new deceased assistant director Jimmy. Jimmy was killed two days later by an unknown assassin, perhaps hiding his real intentions forever.

The organization continues to maintain many public and secret bases all throughout the Shire, and continues to expand every day.

Mr. Wolf Tower, as occupied by the SIA.