Modaora is a large self-contained floating city found in one of the northernmost oceans of the Shire. It was once the Luce Futura; a space ship designed for multiverse travel and exploration. Her original crash site was the Ice Region on the northern Shire border. She is now in the middle of one of the Shire's northern oceans, sending a constant, repeating signal out into the universe via her intergalactic lighthouse. 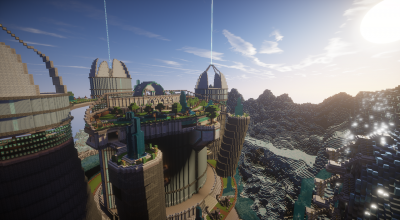 The Modaorans are descendants of Humans from planet Xeiyre in the Cabraxte System of the Enyanedes Constellation. The Modaorans are 38th century ancestors of the first generation of Humans who traversed the invisible highways of the Multiverse. Their history dates back to Xeiyre's Chaos era but more notable history can be found in the Space Exploration Era of the Humans, beginning ~3200CE, when Xeiyre's International Space Exploration Administration developed their first space ship capable of Multiverse travel. The effort was a monumental feat, achieved in a desperate time for Humans as their planet was dying after centuries of over-population, pollution and war.

The planet of Modaora was discovered in 3242AD (Earth) or "Zero Year" as Modaorans would come to know it. Roughly the size of the Milky Way's Sol System's former planet, Pluto, Modaora's atmosphere and terrain was almost identical to that of their ancestral planet at around the 1200-1600CE centuries. The Xeiyre ISEA would spend the next 90 years and three generations of astronauts exploring Modaora - mapping her continents, cataloging wildlife, testing water and doing countless missions to ensure the planet was inhabitable.

Because of the extremely challenging selection process Humans went through to gain passage to Modaora, the vast majority of her inhabitants were the brightest, most talented and gifted of the Human race. Modaora would be inhabited by geniuses in science, medicine and the arts and their families. This created an environment for evolution and growth that noone on Xeiyre could have ever imagined. Religion had become more of a respected ancient tradition and spirituality for the Modaorans had evolved to a physiological relationship with the energy of the multiverse and a simplified ideal of being kind, fair and honest. Unlike on Xeiyre, Modaorans cooperated as a single nationality focused on maintaining the planet as a place borrowed from their children. The Modaoran race experienced an unprecedented amount of evolutionary growth over the centuries they would spend as the new caretakers of the tiny planet - looking and behaving less and less like their Xeiyreling ancestors. With a profoundly greater understanding of the multiverse, her energy and their importance, the Modaorans were able to achieve what was only dreamed of - a world of peace, prosperity and innovation.

In the chilly early morning hours of a January day, a flash streaked across the Shire skies and ended with an almost delicate thud on the edge of the world.

The night of the MIEA crash landing that brought the Modaorans to The Shire was moonless and still. As the Modaoran ship, Luce Futura, tore through the Shire's atmosphere, thunderous booms echoed through valleys and blanketed over villages. The streak left in her wake was like a single brush stroke that painted over the stars. One would be challenged to call the landing a "crash" as the Modaoran MIEA ship padded down almost gracefully on the edge of a waterfall. The Modaorans scrambled to assess the damage they were sure the ship had sustained but were shocked to find only minor cosmetic damage in the form of fallen items and a some broken glass. Children were comforted by their parents as they all shuffled around, unsure of what to do next. The rest of the night was full of questions and confusion. Morning only brought more. Weeks went by as the Modaorans did their best to return life to some semblance of normalcy. None of them had ever seen a blue sky, land, birds flying. None of them had ever seen a lake or river flowing. Their lives had always been an endless black that glittered with stars and planets. A reconnaissance team was assembled to suit up and asses the atmospheric conditions of this strange planet that seemed almost too good to be true. Every day, for two weeks, the recon team went out at dawn and came back at sunset. Tests on local plant life, water and vegetation confirmed that the planet was atmospherically identical to the home planet they had never seen and only learned about in history lessons. They were saved. Many of the Modaorans feared the sudden change in their way of life. They wanted to return to the infinite black that many humans would find daunting but the Modaorans found comforting. There was a divide among the people that no one could know who was right or wrong; but no matter which side they were on, one thing was certain - The Modaorans could not be dragged away from the Luce's windows. All the things that humans barely noticed, the Mdoaoran's watched in awe. The flowing sway of tree branches in the wind, birds in flight, the roar and sprays of the waterfall, brilliant sunsets and sunrises. At night was when they would look to the sky and feel a longing for home. The skies were different to them now. They could understand that they were still among the stars and planets, but somehow being on one of those planets now changed everything.

This would also be the first time the Modaorans would need scouts, guards, a defense force. Their lives had all, on the same night, been divided into two parts; everything that happened before the landing and everything after. And everything after was a complete mystery; both fascinating and scary at the same time.

The Kindness of Strangers

Three months had gone by and life on The Shire had finally found a sense of normalcy for the Modaorans. In an effort to find compromise between those Modaorans who wanted to return to the skies and those who wished to make the Shire their new home, an agreement was made. They would build an Intergalactic Lighthouse using resources and parts from the Luce Futura. While mining for resources, the Modaorans had their first encounter with native Shirelings, the Flamewry. They were a large group of cave dwellers who occupied a series of caves about 10 miles from where the Modaorans were building the Intergalactic Lighthouse. The Flamewry and the Modaorans became quick friends. The Flamewry, an all-male population, were quick to share their knowledge of the Shire with the Modaorans and proved to be a valuable source of assistance and kindness. The Modaorans assessed that the Flamewry were thousands of years behind Modaoran technology . Eventually, the Modaorans invited several of the Flamewry to visit the inner walls of the cit,y confirming the happy friendship that had been formed between the two races. For years, the Modaorans and the Flamewry would coexist as friends and allies.