Difference between revisions of "Laurelian"

Laurelian is a major settlement located in the northeast corner of the Shire. It can be found at /warp Laurelian. It can be categorized as a "Fantasy" build with its uncommon building design and material palette. Laurelian covers a stretch of continent with a variety of biomes and land formations. 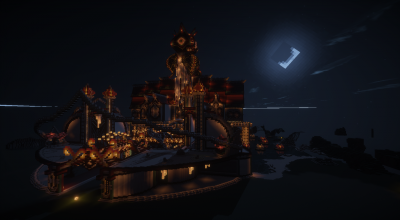 The Modaorans, who came from a distant time and galaxy, survived in peace and prosperity for what seemed like an instant and a lifetime all at once. The strength and resilience of the first generation of the Modaorans seemed to diminish in shocking speed over time. Once an entire race of brilliant scientists, the vast majority of Modaorans had become mere shadows of generations passed. No longer having the radical ingenuity they were once known for, the Modaorans began to suffer greatly and fall to familiar plagues of humanity; plagues of greed, power lust and apathy. Countless failed attempts to grow crops and raise animals in the barren ice region where their city stood resulted in famine and then civil war. One never knows how a people will turn when faced with certain death. The greedy and corrupt (undoubtedly influenced by their friends in Fulfwotz) first turned on the less fortunate citizens and then on each other - sealing a self-fulfilling prophecy of defeat. A small band of brave Modaorans who pledged loyalty to the Modaoran code of "peace, love and prosperity" managed to rescue just 500 citizens of the 9,000 who called Modaora "home." The ice region now sits quietly, soulless and with the scars of its past winding through empty valleys and chilly mountain tops. Their beloved city was transported piece-by-piece to the middle of the ocean where it now sits eerily empty as a cautionary tale for those who doubt that what can be given in abundance can also be taken away in an instant. The Modaorans lived peacefully for almost 200 years in space but fell in just shy of 20 years on the Shire.

These brave refugees traveled across great masses of water and through treacherous lands. As the gypsy band of travelers put miles between themselves and their old home, something magical happened. The pain of their past fell away and drew them closer to a past they had never known but were always tied to. Countless nights spent under clear skies, renewed their bond with the energy of the universe. Their alien bodies began to remember something that had been a part of their DNA and soul selves since the dawn of their own time in that distant universe 38 centuries into their own future. The older members of the gypsy refugees struggled to remember lessons learned of their alien traditions and together, as they walked with backs against the setting sun, they reincarnated traditions that were long dead. Somewhere along their 11 year journey, these hopeful refugees realized something very profound. They were no longer crash survivors. They were no longer refugees of war. They were no longer leaving home. Home was in every night they spent under moonlight. Home was in every old tradition made new. Home was in every step they took together and every tradition they made their own. They had become nameless but knew exactly who they were.