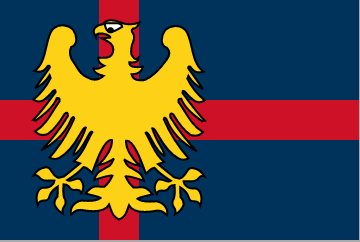 Flag of the Fulflet Union

The Fulflet Union (also known as NICA, Fulfwotz Communist Collective, and NITA) was an ideological group of Floffwymites and underprivileged Fulfwotzians that led a revolution on the evening of May 12th, 1991. The regime, led by pro-human radical Cedon Wexfield, was known for its discriminatory treatment of the Sammichian race, executing an estimated 12,000 between the years of 1991 and 2007. Following the revolution and deposition of Emperor Sammich the Magnificent, the new government went to great lengths to ensure that any indication of the former empire were hidden from the citizens, such as rededicating the Fulfspyre monument to the "First Revolution" instead of the Civil War (which led to the Empire's formation), and more controversially, dismantling the famous Follywood Sign. Fulfwotz was also renamed Fulfgorod during Fulflet rule. The Union also entered a period of brief isolationism during these changes, allowing absolutely no contact with other nations. This ended once the Fulflet Union began making breakthroughs in the field of science and engineering through use of the Wexfield Scientific Coalition.

Through the years of 1997 and 2000, the Fulflet Union and Oranjestad entered a rapid war as tensions rose to extremes after the attempted reclamation of Fulfgorod. The war was dubbed the Red War by Shirefolk, and many feared that a war between two Shire superpowers with notable arsenals would lead to a third world war; some Shirefolk even consider it to be so.

The Fulflet leader, Premier Cedon Wexfield, was ousted in 2007 by a second communist coup, this one stating it had purer intentions. In the turmoil of the second revolution, the allied forces of Oranjestad, Laurelian, and Sol pushed into the city and enforced order. Emperor Sammich, along with his expelled Chancellors and members of the Sammichian Imperial Chancellory, entered the city and reassumed power the next day. Despite Fulfwotzian protests, who wished to publicly execute him, the Chancellory voted to hand him over to the Shire United Nations International Court (SUNIC), where he was handed back to the New Sammichian Empire and thrown from the reconstructed Follywood Sign. Fulfwotzians joked that it was a way to "rechristen" the monument.